Three referee as been promoted by the NBA to 2021-22 officiating staff.The three referee are Brandon schwab , John Conley and Danielle Scott who are to move up after 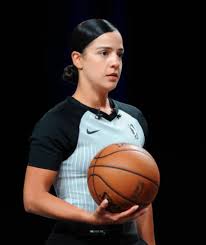 spending several seasons in the G league of the NBA

Scott is one of the three referee's promoted up to full time NBA officiating status for the 2021-22 season.

A very big congratulations to them on their advancement to our full time staff said McCutchen, "Each official has diligently worked at th craft and performed at a level to qualify for the position of officiating NBA games on a regular basis"

John Conley has officiated Seven seasons in the G league of the NBA.worked for 25 regular season in NBA games as non-staff official during the 2020-21 season.Cnley as also officiated his first season in the WNBA in 2021,He has 10 years of collegiate officiatiing experience.

Danielle Scott has four seasons to her name in the NBA G league officiatiing experience.She has worked in 26 NBA regular season matches as a non staff official during the 2020-22 season,she was also a WNBA official in 2021.Her officiatiing career includes eight. years of experience referring games at the collegiate and school level also.

Electronic-terrorism, voice to skull and neuro monitoring on Hive and Steem. You can ignore this, but your going to wish you didnt soon. This is happening whether you believe it or not. https://ecency.com/fyrstikken/@fairandbalanced/i-am-the-only-motherfucker-on-the-internet-pointing-to-a-direct-source-for-voice-to-skull-electronic-terrorism

Plagiarism is the copying & pasting of others' work without giving credit to the original author or artist. Plagiarized posts are considered fraud and violate the intellectual property rights of the original creator.
Guide: Why and How People Abuse and Plagiarise
Fraud is discouraged by the community and may result in the account being Blacklisted.

Will Definitely work on this,but this was written Myself,,but I will make sure my subsequent one are purely my English.

Never mean to go against the rules